Unlike most scientists who land at OPC, Ella McDougall does not have a childhood ocean-bonding story. She loved science and being outside, but the event that ultimately sent her onto the coastal path came in the form of destruction. Ella was living in Peru as a member of the Peace Corps during a major El Niño flood year. Over the course of three-four weeks, mudslides tore down the low-lying Sierra coastline, destroying towns and killing people. While the town Ella resided in remained relatively unimpacted, having a front seat to damage made worse by a changing climate inspired her to look into grad school for policy and management. 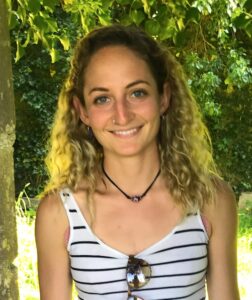 She enrolled at the Middlebury Institute of International Studies in Monterey, where she studied ocean and coastal research management. This led her headfirst into coastal adaptation – and into a different sort of California than she’d expected. “I’d never been to California until I went out to look for housing,” Ella recalled. “I thought California was warm and sunny all the time!” The raw, rugged scenery of the Central Coast made up for the cold, and Ella found herself exploring more areas inland while leading field trips and hikes for school groups via a local nonprofit. . “The microclimates were mindblowing,” she said. “And I’d never seen such a diverse coastline. I was blown away by how different it was from the East Coast.”

Following her graduation, the City of Santa Cruz hired Ella on as a climate analyst – she’d asked for an internship and was given a part-time job. That led to a Sea Grant Fellowship at the State Coastal Conservancy, then the job at OPC (with plenty of skiing in between). Working at the state level broadened Ella’s horizons considerably. “Sea level rise became much more tangible,” she said. “I realized coastal adaptation is so much more about community and society, such an intersection of all these complex things: habitat, transport, communications, equity… It’s just fascinating how planning goes in a million different directions.”

Fascinating and important as her work may be, conveying what she does to friends outside the policy field can be tricky. “I try to use three ‘Ps’: programs, policy and projects that prepare communities along the coast for the impacts of climate change,” Ella explained. “It’s not what I expected, but it is my dream job.” She remembers reading the position description thinking, “Wow, I hope to be able to get a job like that in five years – it’s like somebody took everything in my subconscious to make a perfect job and put it on paper.”

This passion for transforming scientific findings into something valuable that people could use to benefit communities and increase equity comes through when asked what piece of information she wishes the general public would understand. “The idea that a very unequal amount of resiliency goes to super wealthy people,” Ella said. “There’s such a need to make informed and equitable decisions in how we prepare, to bring those left out to the front, to see who is not being included. Once you realize how widespread that inequality is, it’s horrific.”