Opening remarks from Governor Gavin Newsom and CNRA Secretary Wade Crowfoot did not shy away from the urgency and severity of the global climate crisis. As Governor Newsom noted, “biodiversity loss and climate change, by definition, are just two sides of the same coin. Both threaten the health and lifestyle of all of us on the planet.” However, as Secretary Crowfoot emphasized, both people and nature can thrive together. The state’s 30×30 initiative – a key component of Governor Newsom’s 2020 Executive Order on biodiversity and climate – supports that hopeful vision for the future. State leaders, including both legislative members and CNRA officials, emphasized that 30×30 is not a top-down directive. Rather, it is a call to action meant to include, inspire, and motivate; the movement is “wind in our sails,” as CNRA Deputy Secretary Dr. Jennifer Norris described it. 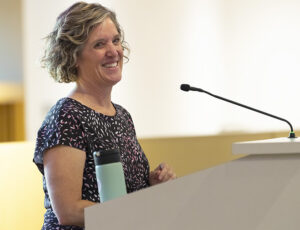 For me, the most exciting part of the event was seeing so many people come together in support of a shared goal. California has already conserved 24% of its lands and 16% of its coastal waters. We’re off to a strong start! But we’ll all need to work together and act boldly to conserve an additional 6 million acres of land and half a million acres of coastal waters by 2030. This requires listening to the diverse voices of all Californians, so I was especially grateful for the 30×30 Partnership’s dedication to equity, environmental justice, and meaningful tribal engagement. Most notably, a new agreement between the Yurok Tribe and California State Parks for co-management of cultural and natural resources in the North Coast Redwoods was announced at the event, demonstrating what’s possible when we think beyond the traditional conservation paradigm, recognize the interconnectedness of humans and nature, and amplify those who have too long been marginalized and silenced.

In the coming weeks, OPC will be sharing opportunities for tribes, environmental justice organizations, conservation groups, fishermen, and others to get involved as we move forward with the strategies and opportunities detailed in the Pathways to 30×30 document. These opportunities include: 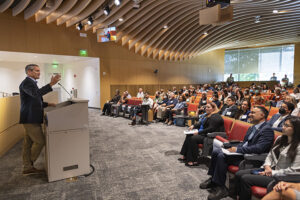 In a world where climate grief can often seem overwhelming, yesterday’s 30×30 kick-off event was a much-needed dose of positivity, enthusiasm, and audacity – the kind you can only find in California. We are so excited to support the vision of the 30×30 initiative. Let’s get to work!