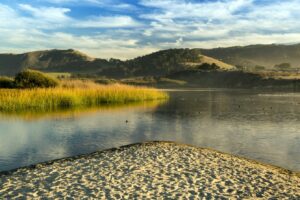 An estuary is an area where freshwater mixes with saltwater. Photo: Doug Steakley

Under the guidance of a Management Advisory Committee, the project team developed 14 standard operating protocols (SOPs) for long-term estuary monitoring, viewable in an EMPA data repository. The team also utilized the California Rapid Assessment Method (CRAM) to develop wetland index scores for 15 sites across the California coast to establish the first inventory-scale data collection in estuaries. Furthermore, a function-based assessment evaluated the condition of EMPAs and reference sites in 2021, forming the first statewide estuarine data collection in the MPA Network. The data is currently undergoing analysis and will be released in a final technical report in early 2023.

Watch the Condition Assessment & Monitoring of Estuaries webinar recording for more detailed observations and background on the assessment development.

Dr. Rick Starr from Moss Landing Marine Laboratories led the Mid-Depth Rocky Habitat (PDF) monitoring project webinar. The project used advanced video systems to assess fish and invertebrate responses in MPAs, particularly in the mid-depth rocky habitats. Most of California’s coastal waters are comprised of this habitat, which lies 30 to 100 meters below the sea surface and contains around 200 different fish species. Many of these species are ecologically and economically important. 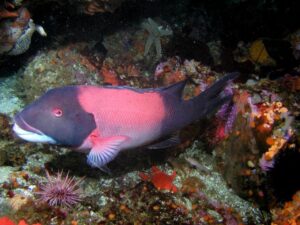 Dr. Starr shared a few key findings of this study:

These two webinars conclude the “Ask the Researcher” MPA Monitoring webinar series. We would like to thank all the speakers and their teams, and all the webinar attendees. Additional thanks to the staff at OPC, Strategic Earth, and CDFW who facilitated these webinars.

You can read the full MPA monitoring reports for all the MPA research projects on California Sea Grant’s website. Short on time? Check out the two-page snapshot summary reports available in both English and Spanish. All the baseline and long-term monitoring data are available on the new California MPA data portal.

You can now view all eight of the post-webinar summaries on our blog and watch the webinar recordings on our YouTube channel.