When I first started working at Heal the Bay in 1988, there was great public concern about DDT and PCB (polychlorinated biphenyls)- contaminated sportfish, especially white croaker. Then Assemblymember, Tom Hayden, championed efforts to clean up DDT contamination and protect the public from eating contaminated fish. I started a few years after Regional Water Board scientist, Allan Chartrand, completed an evaluation on Montrose Chemical Corporation’s disposal of DDT waste at the deep-water dumpsite between Catalina Island and Palos Verdes. In 1997, Heal the Bay completed a study on commercially sold white croaker in Asian markets and found extremely high levels of DDT and PCBs in the fish – posing significant cancer risks to regular consumers. In 2001, the final consent decree on the natural resources damages and Superfund cases against Montrose and others was finalized. 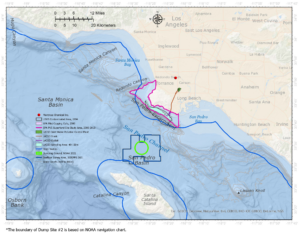 The location of Dumpsite 2 can be seen in the green circle. Image from EPA.

Twenty-two years after that finalization there are still numerous species of fish off LA County coastal waters contaminated with enough DDT and PCBs to merit public health warnings from the Office of Environmental Health Hazard Assessment (OEHHA). Since 2001, there has been a tremendous amount of research demonstrating high DDT levels and toxicological impacts on a wide array of marine mammals and even endangered California Condors. Also, DDT impacts on human health have been found to include a lot more than elevated cancer risk, with researchers even finding increased risks of transgenerational health impacts. Analytical chemists have also learned a great deal more about DDT metabolites, byproducts, and impurities. Because all of these findings are recent, none of this science was used by the Environmental Protection Agency (EPA) and others in the late 1990s in the development of ecological and human health risk assessments performed to assess damages from DDT and PCB discharges.

The work of UC Santa Barbara Professor David Valentine, the Scripps Oceanographic Institute, the National Oceanic and Atmospheric Administration (NOAA), and the EPA have dramatically increased our knowledge base on the scope, scale, and method of DDT waste disposal at Dumpsite 2. Along with the increase in knowledge, LA Times’ Rosanna Xia’s DDT stories over the last few years have rekindled a nationwide interest in an environmental issue that most people associate with our past, not the present. Cumulatively, their efforts have achieved the following: mapping tens of thousands of barrels filled with toxic waste in and around (the barrel field is more than twice the size of the dumpsite) Dumpsite 2; An EPA investigation on how the DDT acid waste was disposed of at Dumpsite 2 – including the conclusion that most of the DDT was likely dumped by barge, not in barrels; EPA creation of a website on the Southern California Ocean Disposal Site #2 Investigation; and the completion (led by the EPA and NOAA) of a conceptual model to characterize Dumpsite 2 and assess the ecological and human health impacts of the dumpsite. 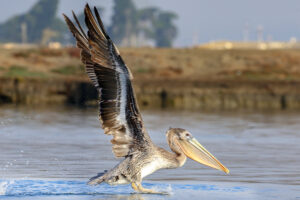 Now, a conservation success story, the California Brown Pelican was nearly led to extinction in the early 1970’s due to widespread DDT use. Photo by Stacy Hayden

As a result, Senator Dianne Feinstein led a successful effort to appropriate $5.6M to study Dumpsite 2 and its impacts to human health and marine life. Scripps is leading that effort. Assemblymember Richard Bloom, working with Heal the Bay and others, successfully fought to put in a matching $5.6M in the Governor Newsom-approved budget for the state to better characterize and study the impacts of DDT to marine life and human health in Southern California. Also, Professor Valentine and UCSB held a workshop in May with toxicologists, oceanographers, engineers, and ecologists to discuss the latest DDT research and how it could inform actions by the state and federal government. Just last week, USC and California SeaGrant held an excellent, well-attended workshop to develop research priorities for the DDT contamination at Dumpsite 2, while also addressing the contamination off the Palos Verdes shelf from sewage discharges and the polluted runoff contributions in Dominguez Channel, Consolidated Slip, and San Pedro Bay.

Workshop recommendations were organized into three categories; site characterization and management, human health and well-being impacts, and ecosystem and environmental impacts. Under site characterization – research recommendations were bundled under fate and transport, degradation, spatial coverage, and what chemicals are in the sediments, the barrels, and the biota. Under human health, research recommendations were provided to help us better understand the concentration of DDT and related pollutants in seafood and characterizing the health risks (cancer and other adverse health outcomes) to consumers of contaminated seafood. The ecosystem impacts research recommendations include benthic community impacts, biomagnification impacts and mechanisms, and ecotoxicity to species throughout the impacted food web. SeaGrant will summarize these recommendations and forward them to the state in the next couple of months. The timing of their effort is perfect because the State Water Resources Control Board (SWRCB) will start leading an effort to determine an approach to allocate the $5.6M in state funds for research in all three of the research categories with a strong interest on filling eco-risk and human health risk gaps along with better characterization of contamination at Dumpsite 2 and Consolidated Slip. The LA Regional Water Board, Department of Toxic Substances Control, OEHHA, Department of Fish and Wildlife, and the Ocean Protection Council will work closely with the SWRCB on this effort.

The devastating impacts of DDT have occurred for well over 50 years, but recent research, political leadership, and strong storytelling should catalyze a local, state, and federal effort to better protect the health of Southern California’s subsistence anglers and extraordinary marine life from the seemingly never-ending threat posed by DDT contamination.