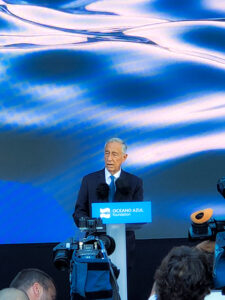 Another ocean conservation leader that made an impact Sunday night was Fijian diplomat, Peter Thomson. Thomson currently serves as the UN Secretary General’s Special Envoy for the Ocean, and he’s been a long-time powerful voice for ocean conservation and reducing greenhouse gases. Thomson expressed that we are currently on the path to a three-degree Celsius increase in average global temperatures which means more marine heat waves, wildfires, droughts, and floods. His personal interaction with his grandchildren on the dire potential outcome of full coral reef collapse globally by 2100 was very compelling. Thomson expressed, “As a grandparent and a Fijian, I can’t accept a world without coral reefs. They make up 25% of marine biodiversity and support millions of people with food and ecotourism.” Also, Thomson gave major props to the young activists at the UN Environment Assembly Nairobi meeting that helped spearhead and catalyze the commitment from 175 nations to develop and sign a treaty by 2024 that will phase out plastic pollution.

The closing speaker was her deepness herself: Sylvia Earle. Sylvia’s biggest gift to the oceans is her unwavering hope that while humans caused ocean ecosystem degradation, we can solve these problems too. She gave the example that cetacean populations have increased markedly in the last forty years because humanity nearly stopped killing whales. This time, the stakes are higher, and the greenhouse gas reduction and habitat conservation solutions must be far-reaching. Sylvia truly believes that we can wean ourselves from fossil fuels. She’s thrilled by the global 30×30 conservation movement and the potential benefits it has for the ocean – stating that when she first started working on ocean conservation, no one would dare push for conserving 30% of the world’s oceans. Another reason for hope. California has been the national leader in making 30×30 a reality, so it was great to hear such strong support and reassurance.

Now the conference begins. Unlike other UN conferences, the Ocean Conference is not about negotiations. It is about increasing government, NGO, and corporate commitments to ocean conservation – to “RISE UP for the Ocean.” I’ll keep you posted in the days ahead.