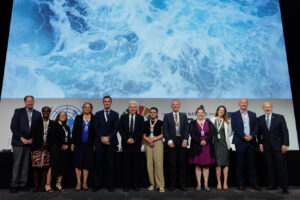 Mark Gold, NOAA administrator Dr. Rick Spinrad, and others at an ocean acidification session during the UN Ocean Conference

The OA Alliance was founded in 2016 and California was a founding member. The Alliance is committed to supporting the monitoring, research, and policy needed to better understand and curtail the growing climate-caused impacts of ocean acidification and hypoxia (decreased oxygen in the ocean). With the addition of the United State, and later the United Kingdom, the list of nations joining the Alliance has risen to 16 with a total of over 120 members including tribal nations and subnationals.

The rest of the session included speeches from renowned scientists, large international organizations, ambassadors, ministers, and more. The OA Alliance executive director and force for nature, Jessie Turner, gave an impassioned speech that touched upon the devastating consequences of OA, the work of Alliance members including the scientific community, and further actions needed to give us all hope. Another reason for hope is the work of the scientific community, notably Steve Widdicombe, a professor from the Plymouth Marine Laboratory and co-chair of the Global Ocean Observing Network along with one of our OA advisors, Professor Jan Newton from the University of Washington, gave numerous talks at this conference on the ever-expanding global OA monitoring network, the results of those efforts, and some of their research. Widdicombe has that self-effacing Simon Pegg vibe going that makes him an unlikely global champion for OA monitoring and action, but his scientific expertise and affable demeanor has resulted in extraordinary success.

In the afternoon, I had the opportunity to participate in a session entitled, “Taking action to address ocean acidification and implement SDG (sustainable development goal) 14.3”. The session was kicked off by Rick Spinrad, The administrator for NOAA and the Under Secretary of Commerce for Oceans and Atmosphere. Spinrad echoed Kerry’s announcement and recounted how he got engaged on OA issues years ago through interactions with Richard Feely (NOAA’s globally renowned and revered OA scientist) and distraught shellfish growers in Oregon that were suffering through devastating economic impacts from OA-caused oyster shell dissolution. He was followed up by James Smith, UK Deputy Director of Marine Policy, who announced that Great Britain was joining the OA Alliance as well. After the kickoff remarks, a panel of OA experts from Argentina, a British Columbian tribal nation, Norway, and California went next. I led it off by talking about how California and Governor Newsom are global leaders on OA and Coastal resilience issues and shared everything California is doing on OA and hypoxia monitoring and research, how OA-caused hypoxia is impacting our coastal waters today, and potential actions to mitigate those impacts. In addition, I talked about kelp canopy collapse on the north coast due to marine heat waves, sea star wasting disease and urchin barrens, and how California was working on research and restoration efforts to help those help forests rebound. And finally, I described the state’s efforts to build coastal resilience through implementation of the sea level rise action plan. As you can imagine, the audience was surprised by the level of California’s investments in climate (approximately $20 billion in this year’s budget alone!), coastal resilience (well over $650M million), and nature-based solutions. The panel was followed up by Jan Newton talking about her OA research work with Olympic Peninsula tribes that tied ecological impacts to tribal cultural impacts and Katy Soapi, an OA scientist from the Solomon Islands that has helped lead and organize an extraordinary OA monitoring and scientist training effort that covers the South Pacific and Australian region.

The overall news on how climate change is impacting our oceans is scary, but the efforts are promising. After seeing numerous OA scientists, government officials, and activists tell their stories, hearing the scientists talk about global OA monitoring network expansion, and listening to financial community leaders express an understanding of the need to invest in projects that reduce nutrient loading, improve watershed management, and use nature-based solutions (including habitat creation/restoration of eelgrass beds, mangroves, wetlands, kelp and more), I’m convinced that a lot of smart and motivated people are working on the issue. A big question remains though – will there be enough financial resources to make a difference quickly and will our actions be too late? With the addition of the U.S. and U.K. to the OA Alliance membership, I feel better about our chances.