OPC’s “Ask the Researcher” MPA monitoring webinar series officially launched in May! This summer series highlights key monitoring results from the marine protected area (MPA) monitoring program, connecting audience members directly to California’s leading MPA scientists who describe their research both inside and outside of MPAs along the California coast and answer questions from webinar participants. The webinar series is responsive to feedback heard through community meetings held by California Department of Fish and Wildlife last fall, where members of the public voiced interest in learning more about MPA science and connecting directly to the researchers who monitor California’s key habitats. Results from these monitoring projects, along with information from other sources, are foundational to informing California’s MPA Decadal Management Review, which will be presented to the California Fish and Game Commission in February 2023.

The kickoff session featured kelp forest ecosystems (PDF) with Dr. Mark Carr from UC Santa Cruz. Carr started by discussing the Marine Life Protection Act of 1999 (MLPA), legislation that directed the State to redesign MPAs to function as a network. The MPA Network was completed in 2012 through a science-based and stakeholder-driven process. Notably, the kelp forest ecosystem monitoring program began in 1999 – 13 years prior to the completion of the Network! Carr shared the four major outcomes of this data: 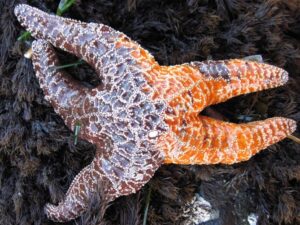 The rocky intertidal ecosystems discussion was led by Dr. Peter Raimondi from UC Santa Cruz. This MPA monitoring program has contributed 16 years of data, from 2004 to 2020, on a relatively rare habitat: only about 11 square miles in all of California! Raimondi shared background on the MLPA, larval connectivity models, and the four main results of this study:

You can read the full technical MPA monitoring reports for these habitats as well as all of the MPA research projects on California Sea Grant’s website. Short on time? Check out the two-page snapshot summary reports available in both English and Spanish. All of the baseline and long-term monitoring data is available on the new California MPA data portal.