California has the largest network of freeways in the country and its cities are known for heavy traffic. Vehicle and traffic emissions not only impact air quality – but can degrade water quality.

When it rains, stormwater carries particles from vehicle tires and brake pads – such as zinc, copper, and microplastics – from city streets and highways into California’s streams, rivers, and ocean waters. Tire particles are also among the largest known sources of microplastic pollution with research completed in San Francisco Bay identifying nearly 50 percent of microplastic fibers that entered the Bay as vehicle tire wear.

Once in the environment, tire particles can be ingested by small organisms or bind with other contaminants, threatening the health of wildlife and entire watersheds that connect California summits to the sea. 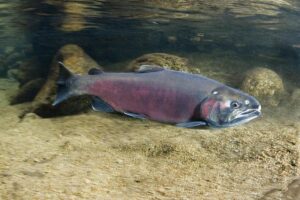 Under a new regulation proposed by the California Department of Toxic Substances Control (DTSC), companies manufacturing motor vehicle tires for sale in California will have to evaluate safer alternatives to 6PPD, a chemical that readily reacts to form another chemical known to endanger California waters and kill threatened coho salmon.

This proposed regulation addresses a concerning link between coho salmon deaths and 6PPD used in motor vehicle tires – 6PPD transforms into a toxicant known as 6PPD-quinone that researchers found kills coho salmon as they migrate upstream from the ocean to inland headwaters to spawn. The chemical has been detected in California streams at concentrations shown to kill at least half of coho in laboratory studies.

Removing this chemical is one action to protect coho salmon, which have already experienced collapse across the West Coast. “The confirmed presence of 6PPD-quinone in California’s waterways threatens the state’s remaining coho salmon populations, which are endangered or threatened, and may jeopardize the recovery of this species,” said DTSC Director Dr. Meredith Williams.

DTSC’s formal rulemaking process initiated this week aims to list motor vehicle tires containing 6PPD as a Priority Product under the Safer Consumer Products Program, with the intent of adopting this regulation by early 2023.

The public can submit written comments on the rulemaking proposal until July 5, 2022.

This rulemaking coincides with DTSC’s current evaluation of other tire-related chemicals, such as zinc. In July 2021, DTSC held a fact-finding workshop on tire chemicals with a recording of the workshop, other information, and presentations on DTSC’s website. DTSC anticipates beginning this rulemaking in 2023 to require tire manufacturers to evaluate potential alternatives to zinc, in addition to 6PPD.