Today we are in the beautiful Bolinas Lagoon of Marin County, this tidal embayment is a Ramsar Site, recognized internationally for its ecological importance. Bolinas Lagoon supports many listed and endangered species including the California black rail, red-legged frog, steelhead trout, and coho salmon. This Prop 68 Project is to finalize the designs for the Bolinas Lagoon Wye Wetlands Resiliency Project. 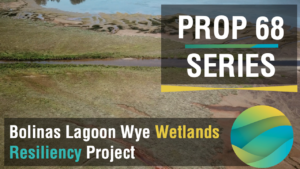 The primary goal of this project is to restore natural processes, reversing past land-uses (ranching, logging, mining) that left the wetlands vulnerable to sea level rise, by fragmenting and developing the area immediately surrounding the lagoon. The design includes removing a part of a road that currently separates the uplands and brackish marshes of the lagoon from neighboring freshwater wetlands and building a bridge to restore tidal flow to the area and removing a barrier to eventual marsh migration. The team has also incorporated plans to reroute a creek that is currently behind a water control structure, to its historical path allowing it to flow directly into the lagoon. They plan to allow the creek to self-form and evolve over time with minimal intervention beyond the initial channelization.

“For the community, their main connection to the rest of the world is this road, which already gets flooded during high tides and storms, one of the ancillary benefits of this project is that they have a more consistently safe and accessible access into and out of their community,” says Max Korten.

“This is a stepping stone, it’s the first step that we need to take to accommodate sea level rise and allow for wetlands to be able to migrate towards our uplands”, notes Veronica Pearson, the Lead Project Manager for this effort. Max Korten, Director of Marin County Parks is hopeful that this Prop 68 Project can help inform future adaptation efforts across the California coast, noting that sea level rise will present some difficult decisions for regions of the state that are heavily developed. “Bolinas Lagoon can serve as a model for the more challenging places in the state where there are harder trade-offs,” adds Korten.

The designing of this project is the product of over 25 years of stakeholder input. “All of our sea level rise adaptation work is all about partnership” says Korten. Partners involved in this project include the National Park Service, CalTrans, Public Works Road Department, Audubon Canyon Ranch, Bolinas Marine Lab, Gulf of the Farallones National Marine Sanctuary, Gulf of Farallones Association.

This project is also overseen by One Tam – a partnership between the National Park Service, California State Parks, Marin County Parks, Marin Municipal Water District, and the Golden Gate National Park Conservancy that seeks to manage the region of Mt. Tam as a collective. “Climate change impacts do not stop at any one of our boundaries, so we really need to be looking at how to best manage the landscape as a whole,” says Korten.

About Veronica Peason: Veronica is a Senior Ecological Restoration Planner with Marin County Parks. She is also the Lead Project Manager for this Prop 68 Project.

About Max Korten: Max is the Director of Marin County Parks. He received his B.S. in Environmental Studies from the University of California, Santa Cruz and his M.S. in Natural Resources from Humboldt State University.