Today we are talking about a Prop 68 Project to develop an Eelgrass Habitat Suitability Model for San Francisco Bay–where many of California’s eelgrass enhancement and mitigation projects have been conducted. In order to successfully restore eelgrass, we need to first find the best locations to restore, which is not as easy as it may sound. 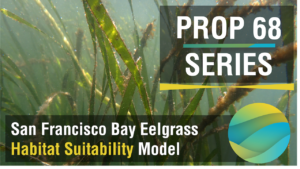 The goal of this project is to update an Eelgrass Habitat Suitability Model (HSM) that was first developed by Merkel & Associates more than 10 years ago. Not only do we have much better data today than was available 10 years ago, we also know much more about the conditions that eelgrass needs to successfully establish and expand, post-restoration. This project takes advantage of the wealth of data now available and applies lessons learned from previous restoration projects and our improved understanding of how eelgrass may respond to climate impacts to develop an adaptive, climate-smart HSM. “We have learned a lot through our restoration efforts about what works and what doesn’t, but site selection remains a tricky problem, especially as we think about the future of eelgrass habitats as conditions shift with climate change,” states Dr. Katharyn Boyer, the lead academic on the project. 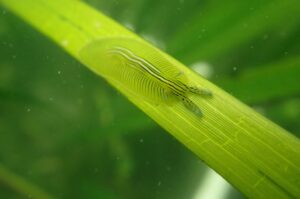 This collaborative team includes individuals from Audubon California (Andrea Jones and Daniel Orr), San Francisco State University’s Estuary & Ocean Science Center (Dr. Katharyn Boyer), and Merkel & Associates (Keith Merkel and Whelan Gilkerson). The bulk of the modeling and mapping will be led by Merkel and Associates, a leader in the state for eelgrass mapping and mitigation, and Daniel Orr, Senior Scientist with Audubon California’s Spatial Science Team. The teams at San Francisco State University and Audubon will be convening an expert panel of eelgrass ecologists, restoration practitioners, and climate scientists to provide feedback and guide the development of the HSM and final products.  Public-facing materials, including an interactive GIS web application will undergo regular updates by the Team. The HSM output is expected to identify new areas suitable for eelgrass restoration as well as areas where eelgrass is currently absent, but occurred historically.

“The reason Audubon is interested in eelgrass is because of the ecosystem services it plays in estuaries and the wildlife it supports. Estuaries are incredibly important, yet are threatened in CA by climate change and development. They support an incredible diversity of wildlife, act as critical bird habitat along the Pacific Flyway, and support both urban and rural communities,” notes Andrea Jones, the Project Manager for this effort. There are many bird species that are reliant on the eelgrass meadows of San Francisco Bay–one such bird is the surf scoter, a large sea duck that winters in the Bay. Surf scoter populations have declined by 50% in recent years in part due to a lack of food (herring eggs) that is reliant on healthy eelgrass meadows. This highlights the connectivity between a primary producer (eelgrass), spawning fish (herring), and a migratory bird (surf scoter) that could be strengthened by improvements in eelgrass management and conservation.

“A single eelgrass shoot can have hundreds of small invertebrates clinging to it, which are an important link in the food web of birds and fish, so it is really important that we develop tools that maximize our ability to create these habitats successfully”, says Dr. Katharyn Boyer.

OPC has a Strategic Plan Target (3.1.4) to preserve the existing, known 15,000 acres of seagrass (including eelgrass) in California and create an additional 1,000 acres by 2025. This Prop 68 Project is a necessary step towards achieving this target by identifying where eelgrass can potentially grow, naturally and with human intervention, today and into the future.

About Andrea Jones: Andrea is the Director of Bird Conservation for Audubon California. Prior to Audubon California, Andrea worked at Massachusetts Audubon where she served as the Director of the Coastal Waterbird and Grassland Bird Conservation Programs. Andrea received her M.S. in Wildlife Conservation/Ornithology and her B.S. in Wildlife Biology and Management from the University of Massachusetts, Amherst.

About Dr. Katharyn Boyer: Katharyn is a Professor of Biology at San Francisco State University. She received the 2021 Coastal and Estuarine Research Federation William A. Niering Outstanding Educator Award for her dedication to education and mentoring the next generation of ecologists, coastal managers, practitioners, and stewards. Her lab at the Estuary & Ocean Science Center explores how species interactions influence key ecological processes in coastal habitats, mainly salt marsh and seagrass systems. Katharyn received her B.S. in Zoology at the University of Maryland, her M.S. in Biology at San Diego State, and her Ph.D. in Biology at University of California, Los Angeles.

About Madeline McEwen: Madeline is the Coastal Communications Intern for Audubon California. She  grew up in Montana and has always had a passion for the natural world. As a graduate student in Environmental Science at UC Santa Barbara with a degree in film, she has been focused on storytelling through compelling and awe inspiring media forms, captivating her audience with a beautiful scene or a jaw-dropping animal interaction and using that as a way to better communicate natural history and the importance of science. Driven by her interest in documentaries, Madeline takes an artists’ perspective when communicating the relationship between humans and their environment.