Episode 0 – Who is OPC? What is Prop 68, a brief primer on the Climate Resilience Miniseries

The Ocean Protection Council (OPC) was created by law in 2004 with the passing of the California Ocean Protection Act. OPC is a Cabinet-Level State Policy Body within the California Natural Resources Agency. The mission of OPC is to ensure that California maintains healthy, resilient, and productive ocean and coastal ecosystems for the benefit of current and future generations. To meet its mission, OPC  is tasked with developing science-based policy recommendations to decision-makers and coordinating with other ocean-related state agencies and partners to advance state efforts to protect ocean and coastal resources informed by the funding, collection, and sharing of scientific data. 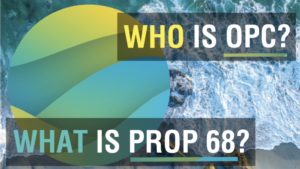 What does that mean in practice? Well, at the start of this year (2021), OPC funded 15 coastal resilience projects using funds allocated to OPC through Proposition 68. These “Prop 68 Projects” – as we will call them throughout this mini-series – were chosen in large part for their alignment with OPC’s mission, and specifically our Strategic Plan.

So, what is Proposition 68? Well if you voted in California’s midterm election in 2018, you probably saw this proposition on the ballot. Proposition 68 was first drafted by Senator De Leon as a senate bill to enact the California Drought, Water, Parks, Climate, Coastal Protection, and Outdoor Access for All Act of 2018 – but we know it as Prop 68, a proposition that voters passed, issuing $4B in bonds to be allocated to projects around conservation, water, and parks.

Thirty-five million of that $4B was allocated to OPC to use for grants for projects that ‘conserve, protect, and restore marine wildlife and healthy ocean and coastal ecosystems with a focus on the state’s system of marine protected areas and sustainable fisheries’ and $21.2 million was allocated to OPC to fund projects that ‘assist coastal communities, including those reliant on commercial fisheries, with adaptation to climate change, address ocean acidification, sea level rise, or habitat restoration and protection, including, but not limited to, the protection of coastal habitat associated with the Pacific Flyway.’ Our miniseries will focus on this last chunk of projects, those that were funded under Chapter 10 of Prop 68 – Climate Preparedness, Habitat Resiliency, Resource Enhancement, and Innovation.

OK, so that’s a mouthful and a lot of terms. This miniseries is meant to show you, our audience, where some of that voter-approved funding went by taking a deeper dive into many of those Prop 68 projects. And if you want to learn more about what we’ve discussed in today’s video, check out the resources below!

Thank you for the footage provided by…

About the Author: Dr. Kat Beheshti is a 2021 California Sea Grant State Fellow with the Ocean Protection Council’s Climate Change Program. Kat’s own research focuses on understanding the drivers of loss and recovery of key coastal foundation species (e.g. salt marsh plants and seagrasses). Kat is committed to making science accessible to individuals of all ages and demographics. She hosts her own science communication platform, sloughit.com and participates in an interdisciplinary science communication team at SciAll.org, where is a Lead Vlogger.