At an event this week in Coronado, CA, the Ocean Protection Council took the lead for California to forge a groundbreaking partnership between California, Oregon, Washington and several international partners that committed to protecting coastal communities from the threat of rising ocean acidity.

California Governor Jerry Brown was joined by Governors Jay Inslee of Washington and Kate Brown of Oregon, as well as the Deputy Chief of Mission at the Embassy of Chile in the US, Patricio Utreras, and Consul General of France in San Francisco, Emmanuel Leburn-Damiens in this International Alliance to Combat Ocean Acidification. 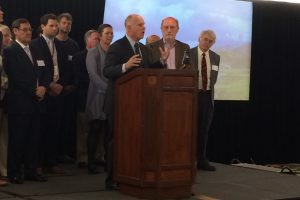 California Governor Jerry Brown addresses the media and meeting attendees about how California intends to take strong action to fight the effects of climate change. CA Secretary of Natural Resources, John Laird and others, look on. PC: Paige Berube.