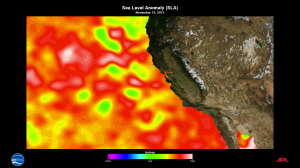 The strong El Niño conditions that developed in 2015 and are projected to continue until 2016 are causing changes in sea levels and living marine resources. The following resources provide information on these changes and how to prepare for the impacts of El Niño on the coast and ocean.

NOAA site on “Coastal Flooding in California: What you need to know” on El Niño, elevated sea levels, King Tides and potential impacts from coastal flooding

USGS summary “What does El Niño mean for coastal California?”, which includes the summary that waves may be up to 30% larger than normal; winds will be stronger; rainfall will be greater than normal, especially in Southern California; and sea level will be 8-12 inches higher than normal and even higher during storms due to winds and waves.