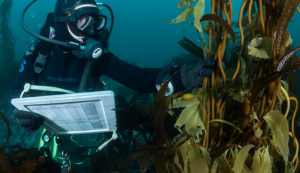 California’s collection of 124 marine protected areas (MPAs), which spans the state’s 1,100-mile coastline, is unique in its size, scale, biogeographic and cultural setting, and status as an ecologically connected network. As the MPA network approaches its ten-year anniversary and accompanying first decadal management review in December 2022, Californians want to know: are our MPAs working? In other words, to what extent is the MPA network making progress toward the goals listed in its founding legislation— protecting the state’s natural marine biodiversity, rebuilding depleted populations, and improving ocean health, especially in the face of a changing climate?

END_OF_DOCUMENT_TOKEN_TO_BE_REPLACED

In collaboration with Coastal Quest, OPC is pleased to announce funding awards to 10 organizations throughout the state of California for the MPA Outreach and Education Small Grants Program, totaling $745,135. This funding supports outreach and education projects to help increase compliance with MPA regulations throughout the state and below Big Sur. The MPA Outreach and Education Small Grants Program is funded by OPC’s once-through cooling (OTC) mitigation fund and designed to ultimately increase marine life associated with MPAs within the geographic region of the OTC facilities.

Additionally, three organizations have received funding from The David and Lucile Packard Foundation and the Marisla Foundation for outreach and education projects aimed at increasing compliance with MPA regulations in areas outside of the geographic region of OTC facilities and with a focus on serving disadvantaged communities. These project awards total $144,000.

A full list of the organizations that received awards can be found on the Coastal Quest website.

Ocean Protection Council representatives will meet with co-chairs and members of the San Diego, Orange County, Los Angeles, Catalina Island, and Santa Barbara Channel Marine Protected Area Collaboratives, on Wednesday, April 29, 2015, from 10:00 pm to 5:00 pm, at the Cabrillo Aquarium, 3720 Stephen M White Drive, San Pedro, California, to discuss common themes, identify needs, and make plans for the coming year. Council action will not occur at this forum. A copy of the agenda is available here END_OF_DOCUMENT_TOKEN_TO_BE_REPLACED

State of the California Central Coast Symposium, February 27 to March 1, 2013

END_OF_DOCUMENT_TOKEN_TO_BE_REPLACED

California’s 2006 Budget Act appropriated $8 million to the California Ocean Protection Council for the implementation of the Marine Life Protection Act (MLPA) and Marine Life Management Act (MLMA). The Budget Act called for these funds to be expended “pursuant to a work plan developed jointly by the OPC and the California Department of Fish and Game (DFG).” An additional $2 million was appropriated to DFG to fulfill these same goals. To maximize the effectiveness of these associated appropriations, OPC and DFG created a joint work plan that set forth priorities for the complete $10 million.

The OPC-DFG Joint Work Plan was aimed at collecting, analyzing, and applying data essential to the implementation of the MLPA and the MLMA.  Work plan projects focused on three activities: (1) improving methods and collection of fishery-dependent and fishery-independent data; (2) monitoring to inform the management of marine protected areas (MPAs); and (3) equipment improvements to ensure capacity to collect and manage data.  Data and results collected as part of this effort will support MPA monitoring and evaluation, which is being led by the MPA Monitoring Enterprise in collaboration with DFG.

In 1998, California passed the Marine Life Management Act (MLMA), which calls for an ecosystem approach to achieving sustainable fisheries and identifies the acquisition of essential fishery information (EFI) as a critical component in management decisions. EFI includes, among other things, fish population status and trends, impacts of fishing, ecological relationships, habitat information, and other environmental information. In 1999, the State went further, passing the Marine Life Protection Act (MLPA), which mandated a redesign of the state’s system of MPAs “to increase its coherence and its effectiveness at protecting the state’s marine life, habitat, and ecosystems.”

The Channel Islands MPAs became the first of the new MPA networks to be implemented. Established in 2003, the network includes eleven State Marine Reserves (SMRs) where no take of living, geological or cultural resources is allowed and two State Marine Conservation Areas (SMCAs) where limited commercial and/or recreational take is allowed.

Working together, the California Department of Fish and Game and Marine Applied Research and Exploration (MARE) developed an ROV program designed to collect data in the deepwater (20 to 100 meter) habitats in the newly established Channel Islands MPAs—habitats beyond the reach of most SCUBA divers.   The overarching goal of the program was to provide fishery-independent data required by the MLMA and MLPA—data to provide information on relative abundance, species interactions and associations, habitat preference, fishing effects on habitat, distribution, size composition of stocks, and human interactions with the marine environment. When tracked over time, this kind of information may provide managers with an indication of whether stocks are increasing or decreasing, and whether current management measures are achieving their intended conservation objectives. These data are also are needed to improve understanding of marine ecosystems and to enable adaptive management.

Key Findings and Successes A full report on the ROV program results to date is contained in “ROV-based Deep Water Monitoring of the Northern Channel Islands Marine Protected Areas Annual Report – 2009,” Marine Region Administrative Report No. 10-02, which will be posted on the California Department of Fish and Game web page: http://www.dfg.ca.gov.

The ROV data show that fish densities inside the MPAs have been consistently higher than densities in sites with similar habitats outside the MPAs. These differences were also detected by SCUBA based surveys in the shallow water areas adjacent to ROV study sites. While the causes for these differences are unknown, the fact that two independent methods showed similar results validates the use of ROV-based surveys for fishery-independent data collection.

The data have shown only slight changes in density within the MPAs since 2005. Given that most species of rockfish need very specific ocean conditions for successful reproduction, population changes are not expected to occur at a steady pace, but rather as large recruitment events that occur every five to ten years. Accordingly, it is not surprising that we have not yet seen large changes in MPA fish populations. In 2009, however, the team observed huge clouds of young of the year rockfish. Scientists working with MARE do not yet know if this is a huge recruitment class, or simply that the research cruise was conducted a month earlier than normal.

The time series data collected over the last five years has provided a cost effective baseline assessment of finfish and invertebrate abundance inside the MPAs and in unprotected comparison areas. Further, no animals were harmed by this video sampling.

Detailed analysis of data collected during this baseline sampling period is ongoing. The wealth of information contained within the archival video record collected will provide marine scientists the opportunity to expand our understanding of these highly productive marine ecosystems.

Underwater video clips of species in the Channel Islands MPAs