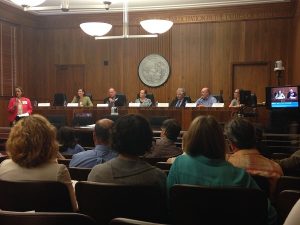 In the morning before the August 27th OPC public meeting, the California Ocean Protection Council and California Ocean Science Trust co-hosted a workshop that brought together scientists, decision makers, tribal representatives, and constituents to share perspectives about what ‘ocean health’ means across our diverse coastal communities.

We are pleased to share with you the summary and full proceedings:

END_OF_DOCUMENT_TOKEN_TO_BE_REPLACED

On September 30, 2014 California became the first state in the nation to enact a statewide ban on single-use plastic bags. In this precedential moment, Secretary for Natural Resources and Ocean Protection Council Chair John Laird applauds the legislature and Governor Jerry Brown for ushering in this ban. END_OF_DOCUMENT_TOKEN_TO_BE_REPLACED

Summary of Resolutions Passed at the August 27, 2014 OPC Meeting

On August 27, 2014, the California Ocean Protection Council passed two resolutions: one to support the State Water Resource Control Board’s adoption of a trash policy, and one to support implementation of the “Safeguarding California Plan for Reducing Climate Risk.” END_OF_DOCUMENT_TOKEN_TO_BE_REPLACED

As part of implementing the California Sustainable Seafood Initiative (AB 1217 (Monning), which requires California to design and implement a voluntary sustainable seafood program, the OPC tasked the California Ocean Science Trust (OST)  to conduct rapid assessments of 11 nominated fisheries (Table 1).  The 11 fisheries were selected with input from staff at the OPC, the Department of Fish and Wildlife (DFW), and the Fish and Game Commission and were chosen based on management interest, seasonal landings, economic value and likelihood of meeting sustainable seafood certification standards. END_OF_DOCUMENT_TOKEN_TO_BE_REPLACED

END_OF_DOCUMENT_TOKEN_TO_BE_REPLACED

Ocean acidification and hypoxia, two phenomena often coupled for a variety of biological and oceanographic reasons, have the potential for profound impacts on living marine resources. Scientists have already demonstrated serious impacts on shell-building organisms, among others, and severe effects on the shellfish industry have been documented in the Pacific Northwest. In California, resource managers, stakeholders, tribes and citizens are beginning to express concerns about these emerging threats to local ecosystems, communities, and coastal economies.

California is uniquely situated to advance collective understanding about ocean acidification and hypoxia and to use this knowledge to inform multiple management strategies. The California Ocean Protection Council and the California Ocean Science Trust are working hand-in-hand to elevate attention to ocean acidification and hypoxia in several arenas. Through its Cabinet-level leadership, the Ocean Protection Council is working both within the state and with West Coast leaders to identify appropriate responses to these coast-wide phenomena. This work is exemplified by the interdisciplinary West Coast Ocean Acidification and Hypoxia Science Panel, convened at the request of the Ocean Protection Council by the California Ocean Science Trust to provide decision makers with the knowledge needed to thoughtfully evaluate effective management actions.

California’s investment in a network of marine protected areas (MPAs) provides opportunities to study the early impacts of ocean acidification, hypoxia and other stressors, while bolstering the resilience of California’s ocean ecosystems in the face of these emerging threats. The Ocean Protection Council and the Ocean Science Trust are positioned at the nexus between science and policy, and this collaboration brings emerging science to bear on evolving policy and management responses within California and across the West Coast. Several key efforts are described below.

The Pacific Coast Collaborative and West Coast Governors Alliance on Ocean Health recognize ocean acidification as a priority ocean and coastal health issue, given the added vulnerability of the West Coast. In December 2013, the West Coast Governors and the Premier of British Columbia mobilized to provide a joint letter to President Obama and Prime Minister Harper in fulfillment of an initial action called for in the Pacific Coast Action Plan on Climate and Energy to enlist support for research on ocean acidification. This letter raises awareness of ocean acidification at the highest levels, promotes the collaborative efforts and leadership from the West Coast, and requests specific action and enhanced support from our federal partners. In response, a convening of state, provincial, and federal leaders to develop a joint strategy to address ocean acidification and hypoxia is currently being planned for later in 2014. The OPC Executive Director is in close contact with counterparts in Oregon, Washington and British Columbia on this issue.

At its September 13, 2012 public meeting, the OPC formally charged the OPC Science Advisory Team (OPC-SAT), under the leadership of the California Ocean Science Trust (OST), with convening a high-level ocean acidification and hypoxia science panel to provide decision makers with the knowledge needed to thoughtfully evaluate effective management actions. Recognizing the west coast-wide nature of the potential impacts, the West Coast Ocean Acidification and Hypoxia Science Panel is composed of leading scientists from California, Oregon, Washington and British Columbia who will look for driving mechanisms that are common to the entire Pacific coast. The Panel will build upon the work of the Washington State Ocean Acidification Blue Ribbon Panel, address information and data gaps critical to resource management decisions, and identify the research and monitoring needed to contribute to a west coast-wide assessment of ocean acidification and hypoxia.

C-CAN is an interdisciplinary collaboration among managers, scientists, and industry working to coordinate and enhance acidification monitoring along the entire west coast. The OPC Science Advisor (OST Executive Director) and several of the West Coast Ocean Acidification and Hypoxia Science Panelists participate on the C-CAN Steering Committee. C-CAN works with the regional ocean observing system associations, including the Central and Northern California Ocean Observing System (CenCOOS) and the Southern California Coastal Ocean Observing System (SCCOOS), to coordinate and encourage development of an acidification monitoring network for that serves publicly available data through the sharing of resources. C-CAN has produced a vision document describing how this data could be used by the management community, as well as a core principles document that describes the elements of a comprehensive and efficient monitoring network.

The OPC has committed support to improve scientific understanding of acidification and hypoxia and the impacts to biological resources. The OPC is funding research through California Sea Grant to provide insights into effects of the upwelling of acidic waters and implications for shellfish along the California coast, and recently approved funding for scientists to perform integrated modeling of acidification, hypoxia, and nutrient inputs in the coastal ocean. The project will enhance current regional oceanographic modeling systems enabling a more comprehensive and consistent evaluation of both anthropogenic and climatic perturbations on near-shore physical, chemical, and biological conditions.

END_OF_DOCUMENT_TOKEN_TO_BE_REPLACED

Marine Debris: A Snapshot of Work in California Available for Public Comment

The document is an overview of marine debris related work from a variety of actors within California. It provides the OPC with a better understanding of ongoing projects and will help identify gaps in order to better focus future efforts. Download the document here.  END_OF_DOCUMENT_TOKEN_TO_BE_REPLACED

The meeting summary from the June 12, 2013 OPC meeting can be found here.